August was a hectic month with a trip to Oklahoma to see my family. In addition to these books, I read some fun children’s books which I’ll post about later. My favorites were Knife by Jo Nesbø and Into Captivity They Will Go (set in my home state and available October 1) by Noah Milligan. The audio version of Stay Sexy and Don’t Get Murdered was also lots of fun!⁣
⁣
What was your favorite read from last month?⁣

August was Women in Translation Month which started as an annual observance in 2014. According to LitHub, founder book blogger Meytal Radzinski, in an interview with the American Literary Translators Association in 2016, “discussed how the relative dearth of translated literature by women in English-language markets is a problem rooted in the biases of both (predominantly male) translators and publishers” (30% vs. 70%). #WITmonth celebrates women writers in translation and encourages people to read, discuss, and recommend their books!⁣
⁣
If you don’t know where to start, Book Riot published an article with 50 suggestions for translated literature by women. My favorite on the list is So Long a Letter by Mariama Bâ. 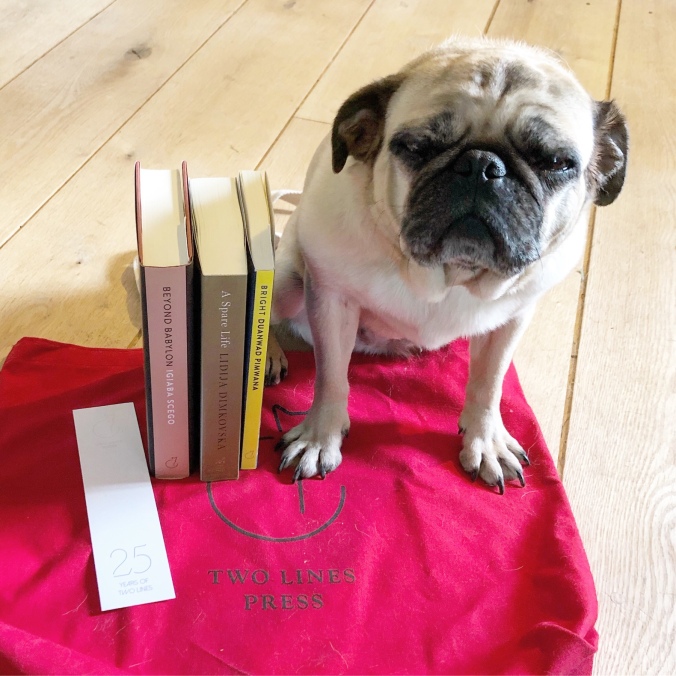 Two Lines Press publishes translated work, many by women. I ordered three books and received this gorgeous tote which you can tell I’ve used because it’s already covered in pug glitter!⁣

Publishing ten books in translation each year, Open Letter Press also makes these titles more accessible to English readers. Be sure to sign up for their newsletters so you’ll be notified next year of their usually very generous #WITmonth sales!

The Wolf Wants In
Laura McHugh

Happy publication day to The Wolf Wants In by Laura McHugh.

In this book, the Keller family–the mother, a survivor of domestic abuse, and two sisters, Sadie and Becca–cannot believe their brother, Shane, died of a heart attack at only thirty-six. Besides a bad back from a lifetime of hard labor, Shane never exhibited any health problems. Sadie also thought Shane’s widow. Crystle, showed too little grief, grandstanding at the funeral while disposing of all of Shane’s possessions only days later. But Detective Lacey Kendrick of small Blackwater, Kansas, already disinclined to investigate a closed case, became overwhelmed when bones were found in the wood that might belong to Macey Calhoun, a child who went missing several months earlier, presumed kidnapped by her father.

Without police support, Sadie pursued her inquiry, finding out that Shane had a life he never shared with his family, one that might provide unwelcome answers. At the same time, Sadie reached out to Macey’s mother, Hannah, who had been an acquaintance when both of their daughters attended the same preschool years earlier.

Henley Pettit’s story begins four months before Shane’s death. Just graduated from high school, her paramount goal is leaving Blackwater. Henley, Crystle’s cousin, has long been oppressed by her family’s criminal legacy. With her last name and prominent Pettit features, everyone in town associates her with her uncle’s drug dealing. As Henley tries to escape, her ties to her family–to her uncles and their illegal activities, to her mother and her drug addiction, and to Jason Sullivan, scion of the wealthiest family in town–prevent her from making the break she is desperate for.

Sadie, unable to let go of her quest for truth, and Henley, unable to leave, both find themselves in life-threatening situations that they can survive by their wits and courage alone.

The Wolf Wants In offers an engrossing and well-written saga of the dark side of a small midwestern town, shows the impact of the opioid crisis on one community, and rolls back the facade of a wealthy family to show the disfunction underneath. Having two timelines heightened the tension which reached a crescendo as they converged, while the ending was satisfying.
I found the characters interesting for the most part, particularly Henley, who had to take over adult duties since her mother was incapable, but still had an underlying naivete that at times endangered her. A social worker, Sadie was compassionate and determined, but she sometimes made very poor decisions, such as going to a bar to talk to Hannah, an addict, about a very important development in her daughter’s case. Shane, though only appearing in flashbacks in Sadie’s timeline, was a sympathetic character who possibly engaged in dastardly deeds–I would have been happy to have seen more of him in the novel. Other characters were less developed, such as Sadie’s grieving mother, or more stereotypical, such as Henley’s big, tough, drug-dealing uncles.

Interestingly, the wolf is also a metaphor in McHugh’s previous book, The Weight of Blood. In that book, the wolf represented an external danger. In this novel, the wolf is already inside the gates, an internal threat that is even harder to detect.

Fans of literary thrillers will definitely want to put The Wolf Wants In on their to-read list. At times tragic, at times eye-opening, it’s a gripping mystery that offers more insight than a standard procedural.

Thanks to NetGalley and Spiegel & Grau, a division of Random House, for an advance reading copy in exchange for an honest review.

With 100 delicious recipes, The Vegan 8 by Brandi Doming offers simple, healthy dishes made from eight ingredients or less (not including salt, pepper, or water).Beautiful photographs accompany the scrumptious recipes making the book a feast for the eyes, not just the palate.

Right away, the cookbook demonstrates its uniqueness. The “My Pantry” section is different than other cookbooks providing comprehensive information on spices, non-dairy milk and yogurt, liquid flavorings, flours, nut butter, and starches. Here, Doming indicates which are available commercially and recommended brands and which ones best made from scratch. Many of the descriptions included insight that was new and fascinating to me!

Every chapter is filled with enticing recipes written in a conversational style and labeled nut-free, gluten-free, or oil free as relevant along with the expected prep and cook time. The dishes utilize ingredients in interesting and unconventional ways I had never imagined before such as Pizza Quesadillas using mashed potatoes. Doming emphasizes non-commercial food for the most part but when an ingredient needs to be purchased, she recommends brands and where to purchase them.

Notes for recipes provide very clear information about what substitutions are possible or not advisable and give insight into what gives the dish its signature characteristics such as creaminess. Tips offer ways to enhance recipes, rework them based on allergies (or lack thereof), or to make them more kid-friendly.

I am a disaster in the kitchen, and some of the recipes intimidated me a little because of the preparations involved (or the need for a Vitamix), but I was still very interested in trying them. While I found dishes in every chapter that I wanted to attempt (the soups look particularly creamy and the sides delicious, particularly Almond-Coated Asparagus with Dijon-Tahini Sauce), I thought the Easy Entrees and Staples chapters were most relevant to me. The chickpea dishes–Protein-Packed Curry Chickpeas and Sweet Potato Rounds and Spicy and Smoky Chickpeas in Creamy Tomato Sauce–immediately caught my attention. The Ultimate BBQ Bean Ball Sub looks like a tasty sandwich from one of my favorite vegan restaurants. From Staples, I wanted to make the Emergency BBQ Sauce and the Sesame Teriyaki Sauce posthaste. The Desserts chapter offers options for every taste–chocolate lovers, peanut butter fanatics, fruit fans, or gingerbread enthusiasts.

This cookbook will delight vegans and non-vegans alike and provide strategies for making tastier, healthier dishes.

Thank you to Netgalley and Hachette Book Group for providing an electronic advance reader’s copy in exchange for an honest review.

Reddick worked as an art handler and spent his free time playing basketball at the Y, ignored his own painting career. On a winter’s night in his Brooklyn neighborhood Bedford-Stuyvesan, a young blond woman, drunk, followed Reddick into an alley and invited him to kiss her. He declined, offering instead to get her a ride home. Before he could call a car, she disappeared into his apartment building, apparently returning to a party that she’d momentarily escaped. The next day, he mined the story for laughs until a coworker reminded him that a woman went missing under similar circumstances in Coney Island a few years earlier and her body had been found on the beach. He began questioning his inaction, worrying about the fate of the girl.

That day he was working with a crew dismantling and installing art at the home of the Seward family, one of the wealthiest families in the country and a patron of the arts. While at their home, he learns the woman he encountered the night before was Hannah, the fiancee of Buckley Seward, the family’s only child. He was eager to share his information, but the family was hostile, demanding he refrain from contacting them about Hannah or going to the police hardly veiling that they would have him fired if he disobeyed.

Aghast at their reaction and convinced Hannah was in peril if not dead, Reddick began his own investigation. As he uncovered the layers of relationships in the Seward family and among Buckley’s friends, he confronted the scourge of gentrification in his neighborhood, the specter of a mysterious crime boss, The Genie, and his own racial identity.

Something about the book grabbed me, and I stayed up almost all night reading it. I enjoyed the writing style and was invested not just in the mystery of Hannah’s disappearance but in the question of Reddick’s investment in the case. The characters engaged in difficult and honest questions about race, class, and privilege. Fittingly, these themes were never resolved but offered continual touchpoints throughout the novel. The book also returns to the idea of biases that distort the truth, and Reddick must confront his own assumptions as he unfurls the connections between Hannah, his neighborhood, and the elite world of the Sewards.

Thank you to Netgalley and Hanover Square Press for providing an advance electronic reader’s copy in exchange for an honest review.