Arrowhead Mills’ Sweetened Rice Flakes is my new favorite cereal. It is so tasty, with just the right amount of sweetness. It pairs wonderfully with soy milk. After I eat a bowl, I feel full for several hours.

Amy’s Kitchen Rice Macaroni with Non-Dairy Cheeze is without a doubt my favorite new vegan product of the year. It is very convenient – just four minutes to microwave – and very tasty. The dish is creamy and delicious, though not exactly health conscious at 500 calories a serving. It has been so long since I’ve eaten cheese, I don’t even remember what it tastes like, but this seems very cheesy to me, and I think even non-vegans would find it appealing.

Last night, George and I had to go to ASU’s campus to clear out my office. What a disaster! I forgot to bring the hand cart from home, so George had to carry all the boxes down to my truck. Because he’s a silly man with something to prove, he walked down three flights of stairs each trip instead of taking the elevator. It’s amazing how much junk I’d accumulated over the past four years housed in that office. I filled up the recycling bin with all the unnecessary papers I’d saved.

Since we were in Tempe, we ate at Pita Jungle. I love their Macro Platter. The tofu as well as the beans have the best flavor. The steamed veggies are always so fresh. Since I first tried the Macro Platter, I’ve eaten nothing else at Pita Jungle. The meal had such a lovely presentation–and quite possibly it was the last time I’ll eat at Pita Jungle–so I had to snap a photo for my blog and Flickr. Of course, reticent George was horrified and embarrassed!

You can see all my Flicker photos at http://www.flickr.com/photos/aimeedars. I love comments! 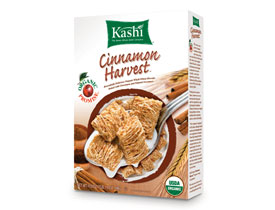 I just tried a new cereal from Kashi, Cinnamon Harvest, part of their Organic Promise line. The cereal is very yummy: sweet, but not overpowering like Frosted Mini Wheats. I ate it dry as a snack, and I know it would be equally good with soy milk.

When I saw it in the store, I wasn’t sure it would be vegan–Kashi isn’t a vegan company–so I turned to the ingredient list. (I’ve seen t-shirts that say Vegan: Ingredient Reader Extraordinaire.) Usually, ingredient lists have about a million items, and most of them are incomprehensible and scary chemicals. Imagine my surprise when the list for this cereal was only FOUR items long, all real, recognizable food items. It was amazing! 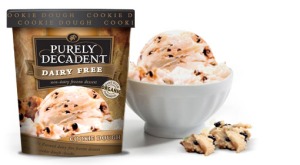 Yum!!!! Purely Decadent’s new cookie dough flavor is the best dairy-free ice cream I’ve had since becoming vegan (besides GREEN’s soynamis, of course). It is creamy, smooth, with lots of cookie dough chunks. I bet you won’t be able to tell the difference.