Please spread the word to vote Yes on 12 to protect millions of farm animals in California. And if you live in California, be sure to vite for the animals on Tuesday! 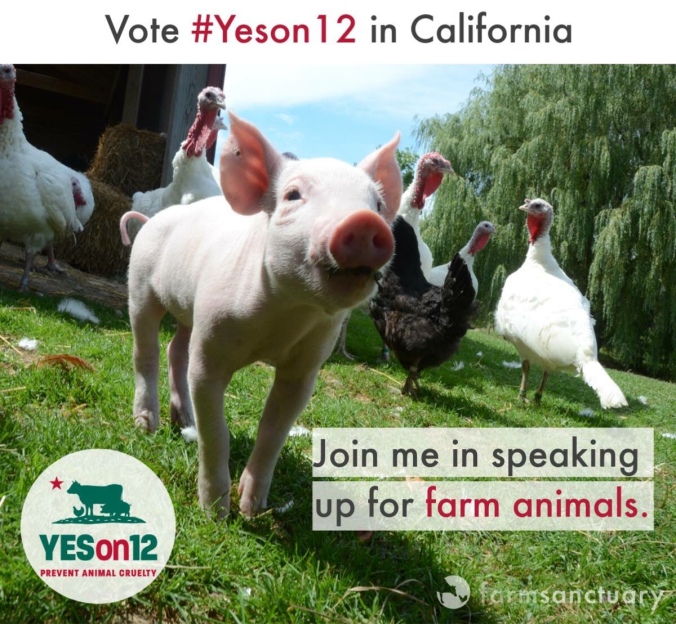 From the Farm Sanctuary:

If California Prop 12 passes, it will help prevent some of the worst forms of cruel confinement of animals on farms in California and beyond. Although this measure won’t end factory farming, it will criminalize some of the most egregious industry practices and will ban the sale of certain animal derived consumer products in California. On November 6, vote #Yeson12, and SHARE this to encourage your friends in California to do the same! More at: https://bit.ly/2NnvU65. Yes on Prop 12 – Prevent Cruelty California

Ted Talk by Will Potter, author of Green is the New Red, about the persecution of activists and the criminalization of non-violent protests.

Two major announcements regarding farm animal welfare provide some measure of celebration for animals in these trying times.

First, in Ohio, activists have been working to get a proposition on the ballot, much like those successfully run in Arizona and California. Instead of proceeding with the ballot initiative, Ohioans for Humane Farms (supported by the Farm Sanctuary, the Humane Society of the United States, and other animal advocacy groups) agreed to drop their campaign if the state’s agricultural industry agreed to several reforms, including a ban on veal crates, a ban on gestation crates, and other measures (which are outlined in this Farm Sanctuary press release).

Second, according to an HSUS press release, today California’s Governor Schwarzenegger signed a bill that requires by January 2015, all eggs sold in California

come from hens able to stand up, fully extend their limbs, lie down and spread their wings without touching each other or the sides of their enclosure, thus requiring cage-free conditions for the birds.

Otherwise, laying hens are kept in cruel battery cages. Imagine if you had so sit on a metal folding chair your whole life – you can’t move, you can’t stand, you can’t stretch. That’s what a battery cage is like. Kudos to Schwarzenegger for signing the bill into law.

In the blog, The PETA Files, Ingrid Newkirk argues that if any charges are brought against BP for the oil spill, animal cruelty should be among them. Newkirk almost presents this as fantasy, which of course it is, but she concluded her post by offering a number of personal choices that can make the world better for animals, including reducing meat consumption (or better yet going vegetarian), working to reduce or eliminate factory farming, and buying less gas and other petroleum-based products. All these suggestions are relevant, and so easy. But, for the record, I am totally OK with charging BP with animal cruelty.

Today, NPR reported on “The Mouse’s Petition,” what may be the first animal rights poem. Written in 1773 by Anna Lætitia Aikin, a lab assistant to Joseph Priestly, the poem is written from the point of view of one of the many mice in Priestly’s tuberculosis lab.

For here forlorn and sad I sit,
Within the wiry grate;
And tremble at th’ approaching morn,
Which brings impending fate.

The well-taught philosophic mind
To all compassion gives;
Casts round the world an equal eye,
And feels for all that lives.

If mind, as ancient sages taught,
A never dying flame,
Still shifts through matter’s varying forms,
In every form the same,

Beware, lest in the worm you crush
A brother’s soul you find;
And tremble lest thy luckless hand
Dislodge a kindred mind.