Nothing like waiting until the last minute…my car tags expire today, and I had to get an emissions test before renewing. That meant a long drive into town to go to an emissions testing station. While en route, I was listening to KJZZ, our local NPR station, and heard a quick but distressing news story on the Petrified Forest National Park.

Although Congress voted in 2004 to expand the boundaries of the park, they have not allocated money for the land’s purchase. Landowners near the park are losing patience–and money–so are looking for buyers. It’s likely that the land around the park will be purchased by developers instead of the government.

It would be nice to think that preserving the land and the archaeological record on it are a priority for our nation.

Many delays on the dissertation due to data analysis trouble. My model has formative and reflective latent constructs which means that writing the syntax for the data analysis is a little tricky, not to mention understanding the theory behind why the constructs are modeled differently. One of the prominent researchers in this area is on the Marketing faculty at ASU, and she has kindly agreed to meet with me this week. I’m hopeful that with her advice, I will have an acceleration in my progress.

All in all, though, the process is making me feel very despondent and unhappy. I’m incredibly stressed, and I’m having horrible headaches daily. I really can’t wait until this is over.

Since George has been working so hard on the house, I’ve been trying to do more domestically. Admittedly, it’s not my strong suit. I did make an excellent dinner. This is a simple dish: soy sauce, garlic powder, snap peas, and SmartMenu Chick’n Strips served with rice. Soooooooo yummy! The food looked so delicious in the pan, I had to capture it in a photo!

If you have not tried the Chick’n Strips, I wholeheartedly recommend them. I prefer them to the Morningstar Farm brand Meal Starters. 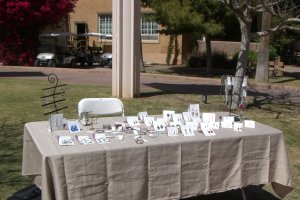 Today, I had a table at the Spring Artfest, an arts/crafts show for ASU students, faculty, and staff. On the plus side, the table was only $10 and proceeds for an accompanying silent auction benefit the School of Art. On the minus side, it was HOT! I got very sunburned–at least I wore a hat. Also, too many people make and sell jewelry, so the competition was fierce, and I didn’t do as well as I’d hoped. (Perhaps I should have ironed the table cloth!)

The organizer told us that the school’s food service would be selling food and drinks, but they were nowhere to be seen. About 1:00, I was about to die for a Diet Coke, when, like an angel, Ben appeared at my booth. Good sport that he is, he went to the MU and bought a super large fountain diet soda for me. With that, I was able to get through the rest of the afternoon.

Later, when I was teaching, the students (who know I am easily distracted), were very interested in my sunburn. They asked where I was to have received such a bad burn, and I told them Hayden Lawn. Of course, they wanted to know why I was on Hayden Lawn all day, so I told them about the ArtFest. They couldn’t believe I hadn’t told them about it, but I explained it would not at all be ethical to promote it to them–an especially egregious offense since MGT 410 is an ethics class!

My interview is featured today on the Vegan Etsy blog! Please visit the site, read my interview, and comment if you like!