I’ve enjoyed watching How to Get Away with Murder this season. Viola Davis is such a presence (even though Annalise’s very emotional moments such as breaking into tears while talking to Nate – inevitably in an alley or parked car at night don’t always seem true to the character). The cases of the week entertain me, and I enjoy most of the Keating Six, particularly Connor, Asher, and Laurel. Wes is not my favorite – “puppy” (and not in an endearing way) is an apropros nickname for him.

My worry is that How to Get Away with Murder will sucumb to the Twin Peaks trap. We had a murder in the first episode that has played out over the last several episodes and in part will be resolved during the mid-season finale. Once the murderer is revealed, where will Murder go? What do you think? How will Murder sustain viewers’ interest once the central case is resolved? 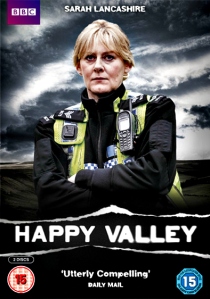 George and I just finished viewing the 6-part series Happy Valley which was originally broadcast on BBC and is now available in the United States through Netflix. As Sergeant Catherine Cawood, Sarah Lancashire gave a brilliant performance. The series is very satisfying because of the interesting characters as well as due to the narrative pacing. One episode depicts the experience of depression better than any other tv show or movie I’ve seen. (Melancholia may be close, but that movie is so surreal, it doesn’t have the same impact as seeing it in Happy Valley.) An overarching theme relates to responsibility for one’s actions and the consequences for those actions, and how each character addresses this is very interesting.

At times, I couldn’t understand the dialogue. It reminded me of a movie, maybe a documentary, set in England that Anna and I watched back in our Chicago days. Although it was an english-language film, the particular dialect of the characters required the film to use subtitles. In this case, though, the difficulty had less to do with how the characters spoke and more to do with how I process sounds.

I was very glad to learn there will be a second season for the drama.

I’m not even going to address the issue of gender stereotypes in this commercial, “Manly Mistake,” for Summer’s Eve Cleansing Wash, about which there is much to say. Today, I want to turn your attention to the euphemism, “a woman’s V.” I have never myself used the phrase nor have I heard anyone in my life or in media use the phrase until this commercial was broadcast. Admittedly, vagina is not the prettiest sounding of words regardless of the fact that networks will not allow the word vagina to be used. Other stand-ins would likely be perceived as, or more, objectionable. At the same time, this rather ridiculous placeholder reminded me how puritan the United States is when it comes to discussing the human body. To me, the commercial says: vaginas, the organ that won’t be named, association with which must be counterbalanced by “manly” activities. On every level, I find it offensive.

Rebecca Cullers voiced the same sentiment in her article, “Husband Accidentally Uses Summer’s Eve then Proves He’s the Real Douche,” (AdWeek) although she makes the point that manufacturers such as Summer’s Eve, who must create demand for their product through cultivating a sense of shame, tread a fine line in marketing communications. In this case, Summer’s Eve did a slight of hand by focusing on dumb men.

I’m not sure what is worse: the underlying message of the commercial or the fact that networks find vaginas too unspeakable to mention.