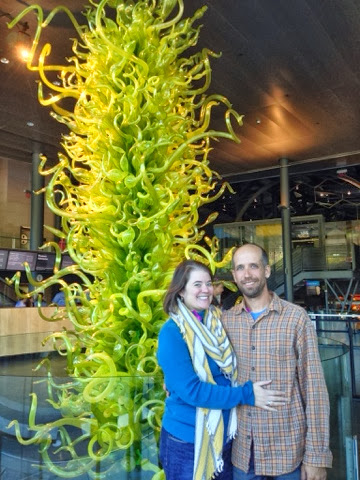 Here we are at the Corning Museum of Glass in front of Dale Chihuly’s Fern Green Tower which always looks yellow to me. I was especially excited to visit during the run of “Life on a String: 35 Centuries of the Glass Bead.”

Here I am with the Dale Chihuly sculpture (I believe installed in conjunction with the 2011 “Through the Looking Glass” Exhibit) at Boston’s Museum of Fine Art. This is one of my favorite museums because it has such strong collections across the board, but in particular wonderful pieces in its Modern American and European exhibits.

What color does the sculpture look to you? I think I see it differently than intended. To me, it looks yellow. It is supposed to be green.

When I arrived in Philadelphia, I had no idea that a new museum, the Barnes Foundation, had opened less than two weeks ago in the city. I was paging through the tourist magazine and saw that advance tickets were required. Luckily, I was able to get a slot at 7:30 p.m. on June 1.
Albert Barnes created the Barnes Foundation in 1922 to promote the appreciation of fine art. One gallery in the museum included his correspondence, much of it around the acquisition of pieces through his overseas agents. It was fascinating to see the negotiations, especially when they went awry, as in one case when a dealer did not want to extend Barnes credit. I decided I liked him immensely when I saw his devotion to his dog, Fidéle, who would occasionally sign letters, complete with his pawprint.

Fidéle’s gorgeous wooden bed was on display, along with many photographs of Barnes, his wife, and the pup.

The collection itself is amazing. Unlike most museums which are organized around historical period, the pieces in the Barnes foundation are grouped according to formal design element. A certain line may be reflected in a modern painting and an ancient African mask as well as a hinge or doorstop. It’s a very different and fascinating approach. Additionally, the collection features more Modigliani than I’ve ever seen before in one place, along with many Picasso and Renoir. This is a museum I’d like to return to soon. If you are in Philadelphia, I encourage you to visit the collection.

Dan Dailey’s The Shrew, on display at the Corning Museum of Glass, aptly expresses my current state of mind.