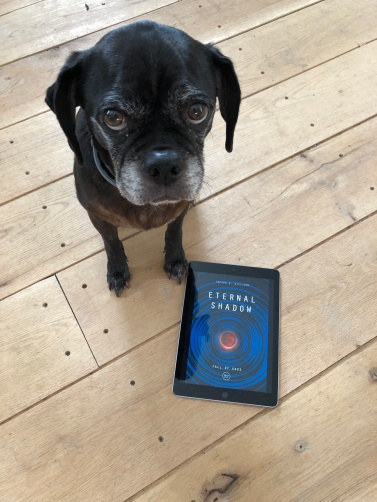 Samantha Monroe, a scientist at SETI, identifies a signal that can only be first contact. She immediately contacts her boss, the unflappable Jennifer Epstein, and colleagues at other facilities, who confirm her readings. But, as they are hopefully watching, what they assume is an alien entity consumes Pluto, and it doesn’t stop at the former planet. Earth is in the crosshairs, and the scientists estimate they have only ten years before the alien ship reaches—and destroys—the planet.

Epstein marshals a hand-picked team to save the world, but changing political priorities and a fringe cult, the Seven Trumpets, encumber her progress. Only South African Muzikayise Khulu, CEO of Khulu Global, has the resources necessary to research and implement a solution, but his motives are less than altruistic. And as Epstein and Monroe work more closely together, their personal feelings intrude on their professional relationship.

Eternal Shadow is Trevor Williams’s debut novel, and the story is interesting, plus I appreciate that the main characters are women and people of color. However, the execution of the narrative has several problems that prevented me from fully enjoying the book. The pacing and proportion of scientific exposition to narrative felt off to me, and the dialogue was awkward, partly because it didn’t ring true and partly because it lacked contractions. Additionally, a number of stylistic and grammatical errors were in the copy of the book I read, which, granted, was an advanced readers edition and may have been corrected before publication. Finally, I wish my two favorite characters (whose names I don’t want to mention due to spoilers) didn’t have nearly as much time in the book as I would have liked, but the ending hints at a sequel.

The author has great stories to tell, and with experience, I hope his style becomes more polished!

Thanks to NetGalley and Trevor Writes for providing an advance reading copy in exchange for an honest review.