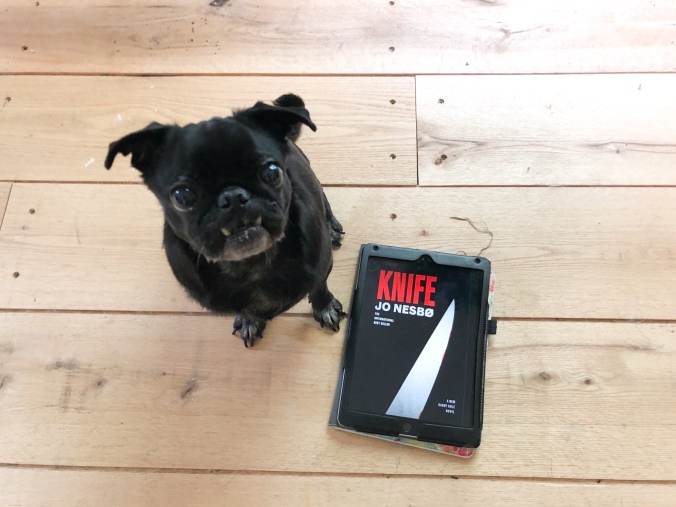 Now drinking again with abandon, Harry Hole lives in a sparsely furnished apartment after Rakel, his wife, asked him to move out. No longer teaching at the crime college, Katrine Bratt arranged a post for Hole in the cold case division where his skills are underutilized and he’s working with Truls Berntsen, a colleague he’s always disrespected.

When a women is killed by a knife through her stomach, Hole is convinced the murderer is Svein Finne, the first killer he imprisoned and who was just released. Katrine does her best to keep Hole away from the investigation and focused on his responsibilities, but her husband, forensic officer Bjørn Holm, Hole’s long-suffering friend, feeds him details about the case.

In fact, Bjørn rescued Hole the night of the murder, the same night that Hole was so drunk at the Jealousy bar he punched the owner in the nose, was banned for life, and woke with blood all over his hands, though he had scant memories of the evening.

Hole enlists Bjørn and his former lover Kaja Solness, recently returned to Oslo, in a secret investigation of Finne, one that threatens not only Hole’s career, and not only his life, which he scarcely cares about at this point, but the lives of others.

Although disparate threads are introduced at the outset of the novel, and it’s filled with red herrings and misdirections, the plot crystallizes so cleverly, it’s impressive. Knife is my favorite Hole novel since The Snowman. I liked how it was structured, the suspects had more reasonable motivations than in the last couple of books, and Hole wasn’t fighting with anyone in the police department—except himself. The most difficult part of the book for me was seeing Hole’s full self-destruction on display.

I think Jo Nesbø writes the best Nordic noir overall, and if you like that genre, I think you’ll enjoy this book; however, there are gory moments. I’m not bothered by that, but I know it’s a deal-breaker for some readers.

If you read Scandinavian mysteries, who are your favorite authors?