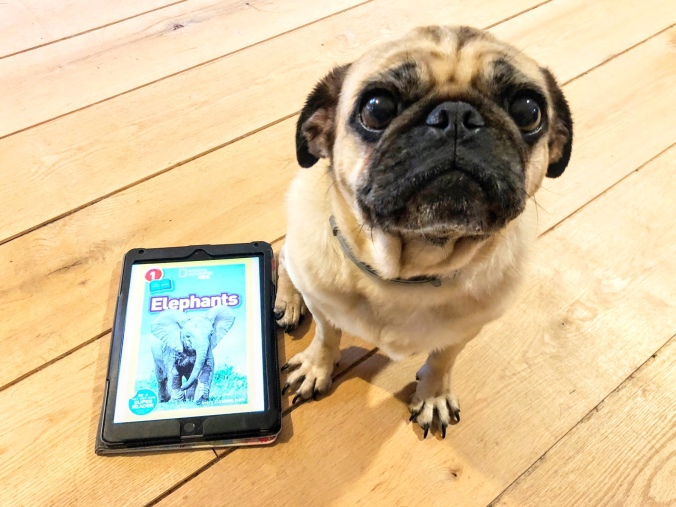 Happy World Elephant Day! 🐘 These majestic herbivores develop strong social ties within their matriarchal social groups. Not only are they one of the world’s largest land mammals, they are also one of the most intelligent, able to use tools and solve problems. They can communicate with each other from up to two miles apart, and they show empathy, even mourning their dead. Sadly, elephant populations are under extreme threat primarily due to habit loss and poaching.

Today, I thought I’d read National Geographic Readers: Elephants to honor these animals. Geared toward ages two to five, this is one of National Geographic’s “You Read, I Read” series. One page is designed for a parent or guardian to read aloud with a challenging world highlighted while the facing page is designed for the child to read and repeats the highlighted word. Each of the brief chapters concludes with a different interactive activity to reinforce comprehension and retention.

This volume about elephants included a lot of information on their body parts, like their trunks and ears, their families, their needs, such as diet, sleep, and water, and their habitat. The text is engaging and age appropriate with the help of an older reader, and the numerous color photographs are phenomenal. The book mentions the declining elephant population and that organizations are trying to help but doesn’t provide details. National Geographic Readers: Elephants is a wonderful introduction to the natural history of elephants for young readers, and the illustrations will absolutely delight them.

If you want to see amazing pictures of elephants and learn how to help, please visit these excellent organizations:

In My Lovely Wife, a couple happily married for fifteen years with two teenage children decide to enliven their relationship by embarking on a shared hobby—murder. When I first saw the book, I couldn’t imagine how Downing would be able to sustain this idea throughout the story. At first, I wasn’t going to read it, but I saw it on so many most anticipated lists that I got it from the library.

The husband, who remains enchanted by his wife, Millicent, narrates the book beginning with his search for their next victim. His story is less about the murders than it is about their unintended effects on the couple’s relationship, children, and community as well as their efforts to remain out of the crosshairs of the police. Once a body is found, an ambitious local reporter attaches himself to the story, and there is some humor in his depiction as well as that of the self-appointed true crime experts at the country club where the narrator works.

I thought this was an inventive story and though certain aspects were unbelievable. I predicted a few plot twists but was surprised by others., I was also drawn in enough to root for the narrator and hope he could escape arrest (though that was slightly horrifying to think about). I was also intrigued by Trista, a complicated secondary character. However, I didn’t always like the writing style. At times, details were repeated at the beginning and end of a paragraph in a distracting way. Also, the author more than once used the construction “XYZ happened, right up until it didn’t.” Because it’s to me a memorable phrasing, reading it multiple times pulled me away from the narrative to think about the writing.

Aa I was almost finished with the book, I couldn’t imagine how Downing would conclude the story, and I anticipated an unsatisfactory ending. I was delightfully surprised by the finale which to me was completely satisfying and also very harrowing. I think fans of Peter Swenson and Shari Lapena will love this book.