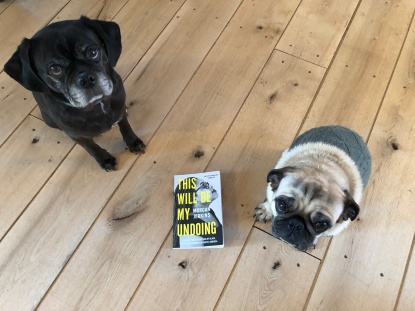 This Will Be My Undoing:
Living at the Intersection of Black, Female, and Feminist in (White) America
Morgan Jerkins

In This Will Be My Undoing, Morgan Jerkins combines incisive social commentary with revealing personal memoir to unabashedly portray the experience of a young black woman in the United States.

Her stories are heartbreaking. At ten, all she wanted was to be a cheerleader, and she threw herself into practice, but after tryouts, the new squad was comprised completely of white girls. Throughout her teens and twenties, she excelled academically and grew professionally, but did not achieve the relationship success she desired–in fact, she had a knack for choosing rather horrible men. Meanwhile, although ambivalent about the procedure, she had surgery for a painful hypertrophic labia minora. She was supported by her mother with whom she had a close bond as well as an evolving understanding of her relationship with God.

As she writes about her own experiences, Jerkins relates the particular constraints society has placed on her as a black women. Her body is problematic, sexualized, objectified, and a source of shame. She is expected to be the Strong Black Woman and bear all burdens. Yet at the same time, she cannot show any kinks in her armor. She explains the lengths she goes to perfect her hair: “black women are conscious of how much our appearances are scrutinized, so we painstakingly put ourselves through these beauty rituals to paradoxically create some kind of peace, to ‘fit in’ and therefore be left alone.” She feels she cannot make a mistake or someone (white) will conclude she is unworthy, that is not like them.

As a result, Jerkins writes about the importance of black spaces, of black writers publishing about their experiences, and of black women supporting each other. Finishing the book, I was angry on behalf of Jerkins and other black women, but also hopeful. At the same time, I was unclear how to be an ally. White women, of which I am one, were eviscerated in the book for either ignoring or appropriating the experiences of black women. While I totally understand that historically feminism has not excelled at understanding intersectionality, surely there is something allies can do. Although, maybe that thing is just to be active, supportive listeners.

Speaking of intersectionality, while I thought This Will Be My Undoing a well-written, engaging, and valuable essay collection, I was disappointed that Jerkins did not give more attention to the topic. A few times, she did mention there is no one way of being a black woman, but overall, she lapses into homogenization or stereotype when dealing with racial, ethnic, and gender groups. Her inability or unwillingness to complicate others often undercuts her arguments and positions her as uncompromising.

Finally, although I adore the title This Will Be My Undoing, I find it inappropriate for Jerkin’s book. What she faces as a black woman could be her undoing, but it is decidedly not. In fact, as she concludes the book, she celebrates not just the presence of black women in previously barred spaces, but their excellence. For those that wanted to subjugate her and others, “This was their nightmare and my joy. Surprise. You should have known I was coming.” This is the battle cry of someone not even on the verge of being undone, someone who is claiming all the places she deserves.