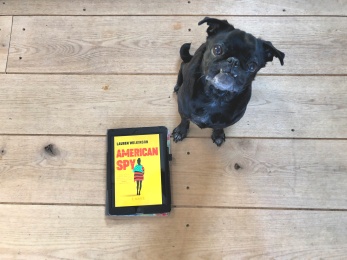 American Spy is an espionage novel that transcends genre. Marie Mitchell, an FBI agent working in the late 1980s who was seconded to the CIA to help undermine the administration of popular communist prime minister of Burkina Faso, Thomas Sankara. After an assassin almost completes his mission to kill her, she retreats to her mother’s farm in Martinique with her four-year-old twin sons.

The novel takes the form of a letter Marie writes to her sons in 1992, shortly after their arrival in Martinique, so they will know her and understand her decisions that led them to that point. Her narrative shifts from her childhood in the 1960s, to her active years in the FBI/CIA in 1987, to her present.

Marie actually didn’t want to be a spy, but her older sister, Helene, knew from an early age that she didn’t just want to be a spy; she wanted to manage spies. Immediately following her high school graduation, she enlisted in the army to join the intelligence division. Her abrupt departure created a rift in the family which catalyzed much of Marie’s later behavior.

When she had a chance to join the FBI, she took a job as a field agent, but her race and gender sidelined her, and her ASAC limited her to recruiting and running agents instead of working on larger undercover operations which might advance her career. At the same time she was losing patience, CIA operative Ed Ross enlisted her to get close to Thomas Sankara (an actual historic figure). Participating in the operation may get her close to men who can provide answers to long-buried family secrets.

Though Sankara was a communist, he also was an environmentalist and advocated gender equality plus he’d made significant gains in children’s health and education. However, he resisted any overtures towards a multiparty democracy.

Marie admires Sankara’s accomplishments and is attracted to him physically, but she also has a mission to complete. Furthermore, she has her personal agenda. She struggles with how to reconcile her conflicting loyalties while protecting herself against those with seemingly unlimited power.

Wonderfully written and provocative, American Spy on one level offers a story about spycraft from the point of view of a marginalized agent tasked with undermining a target with whom she sympathizes. On another, it is about growing up black, particularly black and female, in the United States.

In a sense, we are all spies at one time or another, but for blacks in white culture, “hiding in plain sight” is often expected. This can create ripples of betrayal: betrayal of one’s authenticity, one’s intimates, one’s community, or one’s ideals. The first black undercover operatives in the FBI, for example, were used to infiltrate and discredit civil rights organizations.

As a result, spies are often isolated and mistrustful. In such a world populated with spies, can there ever be unadulterated love and justice? Marie hopes that in telling her truth to her sons, there might be hope.

Also, I cannot express how much I love the cover design for American Spy. It is fabulous!