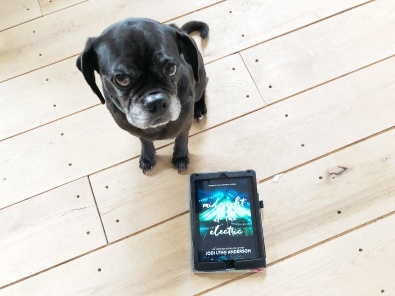 For most of her life, Adri Ortiz has prepared to be one of the elite colonists on Mars. She is leaving little behind on earth; her parents died when she was young, and she grew up in a group home in a Miami made unrecognizable by climate change. When she finally receives her acceptance letter, she learns she has a distant cousin, Lily Ortiz Vega, who lives in Canaan, Kansas, not far from the Wichita training center and will be staying with her during training.

Adri, a prickly character, has only two months to train for her mission, but she is drawn into life with Lily and her tortoise, Galapagos, learning for the first time what it feels like to feel secure in the love of a family.

She also finds a journal and a packet of old letters that capture her imagination. Catherine Godspeed, who lived in Lily’s farmhouse during the dust bowl, wrote a journal about the harrowing dust storms, her concern over her little sister suffering from dust pneumonia, and her nascent love with farm hand Ellis, but after Catherine’s journal abruptly ended, and Adri wanted to learn what happened before she left for Mars.

With Catherine’s journal were a series of letters to her mother, Beth, from her childhood friend Lenore Allstock, still living in England and grieving over the death of her brother, Teddy, in the Great War, yet saving money to travel to America to live near Beth.

As Adri learns about these women of the past and how they changed, grew, and forgave over time, she also reflected on her own character and learned how the women intersected with her own history in surprising ways.

The book is filled with journeys of hope, literal and figurative, as women flee from psychological damage and environmental destruction, though it also considers the notion of home and the extent to which it is tied to a certain place.

My favorite sections of Midnight at the Electric were from Catherine’s journals because I thought it was interesting to read about the dust bowl, maybe because I came from Oklahoma and it’s such an integral part of the state’s history. I liked Lenore’s section the least because the cracks in her relationship with Beth never seemed entirely significant to me and the story in her letters wasn’t entirely innovative. Adri’s relationship with Lily as it developed over time was very sweet, but I wish there had been more scenes relating to her training. I realize that Anderson may have chosen to have a tight focus on the women and their relationships, but I had still hoped for more of a sense of Adri’s world outside the farmhouse. Galapagos the tortoise had a subplot that made me cry ugly (though happy) tears.

Given the audience of Midnight at the Electric, the language is conservative and the level of conflict relatively tame, although it does deal with parental conflict, war, and sex. Overall, it was an enjoyable read that combined the three time periods in interesting and unexpected ways, though threading through them all a sense of hope at the end of a fraught and uncertain journey.