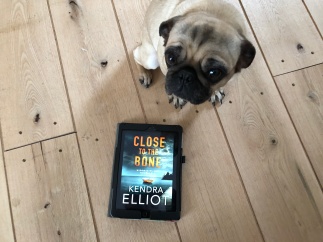 Close to the Bone introduces a new series of novellas from Kendra Elliot and Melinda Leigh set on the remote Pacific Northwest Widow’s Island, a tight-knit community where the gossip mill is faster than text messages and newcomers are viewed with suspicion.

FBI Special Agent Cate Wilde, recently wounded in the course of duty, grew up on the island and has returned home to recover, but human bones, thought to be from an adolescent, are found on the even smaller private Ruby’s Island. Mechanical issues have closed the ferry to the mainland so Wilde’s boss instructed her to go to the scene. There, she met Widow’s Island’s new doctor, Henry Powers, who was surprised to learn his position also made him the island coroner.

Widow’s Island has had two missing adolescent girls–Becca Conan, the daughter of bestselling crime novelist who owns Ruby’s Island and who disappeared two years ago and Samantha Bishop who went missing twenty years ago and who had been the best friend of Cate and Tessa Black, now a deputy on the island.

The novella is told in chapters alternating between Cate and Henry’s point of view as they narrow in on the the identity of the skeleton and the murderer while a simmering attraction brews between them.

A quick and breezy read, Close to the Bone is a good choice if you want to have a mindless and easy distraction that combines mystery and romance.