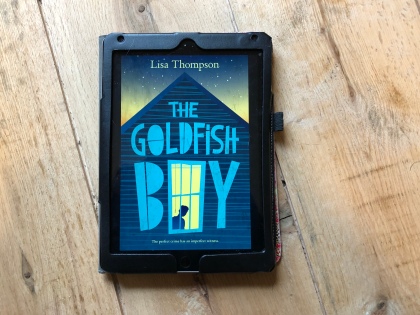 Matthew Corbin, a twelve-year-old who has lived on Chestnut Close his entire life, isn’t like most of his classmates. He suffers from obsessive compulsive disorder, and he is so fearful of germs that not only does he clean his surroundings and wash himself all the time, he is reluctant to leave his house. Instead, he watches the neighborhood from the upper windows of his family’s home, even keeping notebooks of the neighbors’ activities.

He watches when six-year-old Casey and fifteen-month-old Teddy, grandchildren of Mr. Charles, his next door neighbor, arrive for a month-long stay while their mother goes to New York for work, and he sees Casey push Teddy into Mr. Charles’ pond when Mr. Charles is out front talking to Penny Sullivan. He notices the neighborhood bully, Jake, his former best friend, torment Melody, a girl in his class who spends an unusual amount of time in the nearby graveyard. Matthew observes the widow, Old Nina, water her plants at 10:00 each morning, and his gym teacher, Mr. Jenkins, go for his daily runs.

When Teddy goes missing, then, Matthew is sure that he has seen more and knows the neighborhood better than the police, and it’s up to him to solve Teddy’s disappearance. After all, he has a record of his neighbors’ activities the day of the disappearance, and, noticing Teddy alone in the yard at midday, he might be the last person to have seen Teddy. But investigating is difficult when you can’t leave your house, and both Melody and Jake make a case for joining the inquiry. Together, the misfitting trio follow leads, ultimately finding the clue that solved Teddy’s case.

Meanwhile, Matthew’s compulsive washing is so extreme that the skin on his hands is broken, raw, and bleeding. His parents have told the school he has mono, but the authorities are beginning to question his long absence from school. Worried and feeling helpless, Matthew’s parents arrange for him to see a doctor, difficult when he doesn’t want to leave the house. A new therapist, Dr. Rhodes, offers him hope for healing.

For ages eight to twelve, The Goldfish Boy offers a realistic and painful depiction of obsessive compulsive disorder and its possible treatment. Though at times I thought it rather pedantic, the book is a a positive representation that allows any child with OCD to see themselves as a main character or children in general to learn about the condition and develop empathy.

The mystery itself is high-stakes, yet it isn’t scary or gory, so it seems like a good choice for students in the target age group. Not surprisingly, the adult characters aren’t as developed as the children’s, and at first, Matthew sees most adults with some degree of suspicion or distance, but some of the neighborhood residents reveal themselves to be allies. Matthew, Melody, and Jake are all multidimensional with interesting backstories, though the author might be overdoing it on the tragic past angle.

In The Goldfish Boy, the children are given a great degree of freedom which surprised me. I grew up a very, very long time ago, and I would not have been allowed the same degree of movement outside the home. I’m wondering if this is because of the dead-end street where they live giving a sense of security (though a toddler was just kidnapped, so that can’t be right), different expectations of children’s behavior in England, or me having had a very overprotective family.

The Goldfish Boy also provides a hint into how difficult Matthew’s condition is for his parents. Every time they entered the narrative, my blood pressure increased. While his mother attempted to understand his illness, his father was impatient. In their defense, Matthew wasn’t being completely honest about the event that triggered his OCD, but still. At one point, they decided to take down the wallpaper in his room and paint it without talking to him. This seemed to be so disrespectful and boundary transgression that I was beside myself, especially when his dad exhorted him to stop being silly. In response, his mother told Matthew that they’d been too easy on him, and what they were doing was for his own good. I expected Matthew to confide in the therapist and her to caution the parents about their very, very bad behavior. Instead, Matthew decided that he liked how his room looked after all. This sequence bothered me so much as it promotes the idea that parents-know-best, when that is not always the case, and that children should do what their parents say without having a voice. Sadly, I think my distress over this scene will last longer than some of the other more positive aspects of the book.

In any case, The Goldfish Boy offers a readable and at times funny mystery with a non-conventional protagonist that should delight middle readers and help them develop empathy for people who are different, with Matthew, Melody, and Jake all presenting examples of how the past affects the present. It also promotes the idea that friendships might be difficult but are healing themselves.

I like the UK cover so much better than the cover released in the US. What do you think? 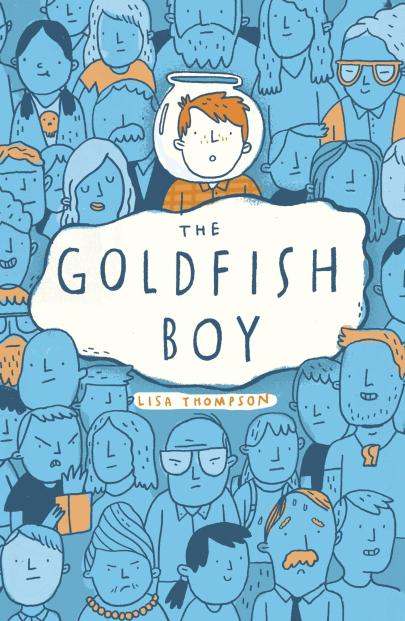