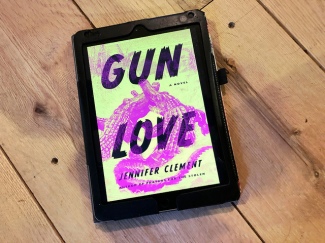 A teenage Margot, who just gave birth in secret to an unusually pale daughter she named Pearl, parked her larger Mercury sedan in the visitors’ lot of the Indian Waters Trailer Park, a near-abandoned community adjacent to a garbage dump. She’d planned to stay there only a few months, until she could find a job and a place for her and Pearl to live. Fourteen years later, the mother-daughter pair still made the Mercury their home.

Frightened that social services will learn of their “dot-to-dot” life, Margot won’t let Pearl have any friends except April May Smith, a girl two years older who also lives in the trailer park. Other residents include Pastor Rex, infamous for his innovative “programs” to increase church attendance, including a monthly “Parking Lot Prayer” where worshipers don’t even need to leave their cars and April May’s parents, Rose, a nurse at the veterans hospital and Sergeant Bob, an Iraqi war vet who lost his leg. Widow and former schoolteacher Mrs. Robert Young and her adult daughter, Noelle, have lived in the park since they lost their house after Robert’s medical expenses bankrupted them. Ray and Corazón Luz, a Mexican couple who keep to themselves, round out the small community.

April May and Pearl occupy their afternoons smoking cigarettes Pearl has stolen from the smokers in the trailer park while pushing their luck putting their bare feet in the river known to house alligators or exploring the dump for abandoned treasures. Pearl, who has never said no to a dare and who courts danger, follows April May’s every command. Despite her surroundings, she is plucky, never falling into despair, and if anything loves her mother too much. Pearl shows no desire for her life to change, but she knows it will when Pastor Rex’s old friend, Eli, comes to stay with him. Eli sings a siren song to Margot, and soon, Eli displaces Pearl for her mother’s time and affection. Eli’s arrival coincides with a new program from Pastor Rex: Guns for God which brings men bearing guns and leaving cash rich. Once Eli seduces Margot, nothing is ever the same.

Based on the cover and promotional copy, I normally would not have selected this book to read, but once I saw it was on the National Book Award long list for 2018, I decided to take a chance, and I am so glad I did. I really don’t think the marketing did the book any favors with how they positioned the title which really doesn’t make clear what gun love means. And while there are most definitely gun loving characters and while the ubiquity of guns and the sound of shooting envelops the trailer park, while guns are gifts to women from the men who love them, the message is not ambiguous: guns cause death, destruction, devastation.

The writing style of Gun Love is deceptively simple. It doesn’t include long sentences or flowery phrases. But it requires close reading. Ideas or words subtly introduced reappear pages later. Clement has such an unusual way of combining words as well. One character feels “joyful sorrow.” When seeing a man she recognized but didn’t seem to place her, Pearl thought, “I wasn’t going to shake up the kaleidoscope of his memory.” When I came upon these gems, I felt as delighted as I imagined April May and Pearl when they found a ten dollar bill forgotten in a pair of jeans consigned to the garbage dump or when Pearl is able to steal not just a cigarette butt but an entire pack.

Paired to the percussion of gun shots woven through the text is the sound of music. (Clements even compiled a playlist to accompany the book.) Margot played piano throughout her childhood and, in the Mercury, “practices” on an imaginary keyboard on the dash. Eli’s voice, twinged with a Texas twang, is a like a song. Corazón idealizes Selena and dreams of visiting her grave as well as confronting the woman who shot and killed her. Or worst, when Pearl realizes that “there is no song inside me.”

Of course, with Pearl and her mother living in a car, the issues of homelessness and poverty are in the background as is mental illness and drug use. Ultimately, social services does become involved, and through Pearl’s social worker, readers see how a broken system wears down the people inside it.

Corazón says that Margot has an “empathy malady”: she has empathy not only for people, animals, and trees but also objects. Pearl found a collection of glass shards and sharp stones in her mother’s pockets: “Everywhere my mother walked she anticipated that someone might be out walking barefoot so she always picked up those objects and put them in her pockets. She kept people she didn’t even know safe.” Pearl believes this is her inheritance from her mother, and her object empathy is a vehicle for her to see all the violence caused by the many, many guns she encounters. Though she sees the deaths and dismemberments in the guns’ wake, and though she knows victims of gun violence, Pearl doesn’t renounce guns but instead carries one with her.

The narrative rolled to an inevitable conclusion that was at once surprising and expected. Gun Love was so much better than I anticipated when I started reading, and I am so glad that took a chance on it. I took great pleasure in the writing style and found the characters interesting. However, it was emotionally difficult given the conditions in which the characters lived. Pearl never engaged in self-pity, and I tried to respect that, but I couldn’t help feeling bad for her or the other residents of the trailer park. Margot’s “empathy malady” is a gift the author gives to the readers as well.