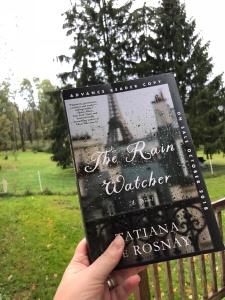 I enjoyed The Rain Watcher so much, I was sad to finish it, and I envy those who get to read it for the first time. In the book, Lauren and Paul Malegarde, along with their adult children Tilia and Linden, arrive in Paris in January 2018 to celebrate Paul’s seventieth birthday and the couple’s fortieth wedding anniversary. Their visit corresponds with torrential rainfall and rising levels of the Seine, threatening catastrophic flooding.

As Paris descends into chaos, the fragile bonds uniting the Malegardes fray under the pressure of long-buried secrets and unspoken truths. The eerie silence of the disabled city mirrors the frost that descends on the Malegarde family when they succumb to fear rather than face each other with courage.

The primary characters are loving and compassionate but isolated, generally kind and well-meaning but also selfish and insecure. Though they are flawed and make mistakes and errors of judgement, they are, to me, most of all likable. I wanted to hug Linden and tell him he had my unconditional love.

Both Linden and Paul are well-known, Linden as a photographer and Paul as an arborist. Their professions aren’t just careers; they are ways of orienting themselves in the world. Though they find photography and dendrology, respectively, rewarding and have access to specialized communities, even followers, due to their work, the work also serves as a barrier. Linden quite self-awarely observes that in awkward situations he uses his camera as a literal shield. Paul’s immersion in the natural world seems to put him on an inaccessible plane.

So much is going on in the well-written and lyrical novel, a close read is rewarded. Besides the recurring symbols of trees and cameras, the flooding (and associated weather) not only summons the dangers of climate change and deforestation, it proves Paul’s observation that in a fight with nature, nature always wins. The book emphasizes place, tracing Linden’s relationship with cities and carefully positioning him within Paris through the invocation of arrondissements, neighborhoods, and streets. I think these details would be even more meaningful to someone familiar with the city.

Voyeurism also problematic within the context of the novel, ironic given Linden’s profession. Tourists and Parisians alike swarm to the bridges above the Seine to watch the waters rise. Other instances of tragedy also attract spectators. Though there is a constant witnessing, in person and through social media, there is also the observation that a natural disaster shows that people on the whole are not kind and considerate towards each other.

Most importantly in my mind, characters in The Rain Watcher crave authenticity and to be seen and accepted for who they are. Without it, they suffer. They suffer self-hatred, displacement, depression, and worse. But acceptance and love are hopeful, healing forces. Although the rain can cause flooding enough to drown a city, it can also be a cleansing force that washes away defenses.

This book made me feel gutted. I ached for the characters, for Paris, for the trees. I became attached to the Malegardes which made it all the more rewarding to see their potential for healing but harder to put the book down.

When I first started the book, though, I wasn’t sure I would like it as much as I did. The topics seemed to change quickly and unexpectedly, and there was some repetition of details that seemed unnecessary. A more significant quirk involved dialog, which De Rosnay treated in what was to my mind an unconventional manner. Instead of a back-and-forth between characters delineated by quotation marks, conversations instead were described. At times, on first glance, it was easy to see these conversations incorrectly as part of the narration from Linden’s point of view. The result was more lyrical but less straightforward prose, and I’m not sure how I feel about it.

Overall, though, The Rain Watcher touched me deeply, and I feel wistful for the characters who I already miss. I think it will appeal to readers who enjoy contemporary literature or literary fiction.

I received an advanced reading copy through a Goodreads giveaway. Thank you Goodreads and St. Martin’s Press!

Most of the chapter epigraphs are in French. I ran them through Google Translate; read them here: The Rain Watcher – Chapter Epigraphs.