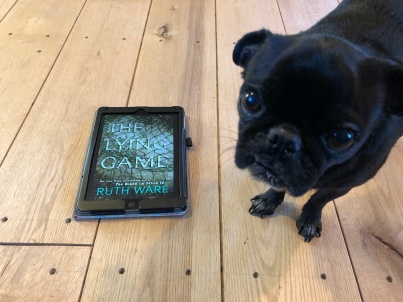 Seventeen years ago, Isa, Fatima, Thea, and Kate shared a Tower block at their boarding school, Salten House. Together, they played the “Lying Game” in which they tried to get the people they encountered to believe outlandish falsehoods. For example, Isa, whose last name was Wilde, convinced classmates that she was a descendant of Oscar Wilde. The girls were awarded points based on a number of variables.

Kate’s father, Ambrose, was the art master at the school and lived nearby, with Kate’s stepbrother Luc. During weekends, and sometimes at night, the foursome would often trek across the marsh between the school and Tide Mill. There, Ambrose would sketch the teenagers, and they would drink, gossip, swim, and test their boundaries.

Before the term was up, though, Ambrose disappeared. The girls were forced to leave the school in scandal. They been together only once since then. But unexpectedly, Isa, Fatima and Thea received a text from Kate: I need you. Without question, the women traveled back to Salten village. There, the truth of Ambrose’s death emerged, and the consequences of playing the Lying Game touched them all.

In some ways, The Lying Game seems to me to have the tightest plotting and most confident writing of all Ruth Ware’s novels. In the first half of the book, though, I was not as interested as I expected. The plot seemed derivative, reminding me of Donna Tartt’s A Secret History. But the narrative took a turn and I was sucked into its machinations.

Of course, the book is about lying and its consequences and how the past echoes in the present, but it is also about parenthood and the sacrifices that parents make for their children. Isa, the narrator, is a new mother, and I think that Ware selected her as the narrator rather than the other women because of her newly awakened parental responsibilities. I am not a mother, so I’m not sure how reasonable Isa is, but to me, she seemed to have an unhealthy attachment to her daughter, Freya, who was her primary motivation for many of her decisions.

The book is also about friendships and what one will or should do to protect friends, though in some ways, in protecting each other, they are also protecting the images they have of their past selves. At the same time, the women have changed and used different strategies to endure lifelong participation in the Lying Game. One of the women, Fatima, had become a devout Muslim since Isa last saw her six years previously. Unlike her teenage years, she now wore a hijab, avoided alcohol, and observed Ramadan. But her religion was not the primary aspect of her personality; instead, she was the compassionate, yet steady and rational member of the group. While the foursome was not very diverse, it was nice to see this aspect of diversity represented. It’s not too often that women of different backgrounds are seen as such close friends in novels (or other forms of popular culture for that matter).

The final sections of the book were full of revelations, but they were less than satisfying. Much of the unspooling was based on Isa’s suppositions rather than any real proof, and the explanations were divulged through inner monologues that were not as exciting as perhaps action scenes or even more dialogue might have been. Plus, Isa’s relationship with Freya’s father, Owen, frayed under her responsibilities to Freya and her obligations to her friends. How this was reconciled was off the page and unconvincing.

Still, the quality of the writing elevates the deficiencies in the plot. This will be a pleasurable read for fans of Ware, and other similar novelists like Paula Hawkins and Peter Swanson.

Recently separated Sarah Mackey traveled to the UK for an annual June pilgrimage. Though she grew up there, she’s now living in California running a charity called Clowndoctor. Unexpectedly, she meets Eddie David, and the two spend an intense week together clouded only by the knowledge that Eddie is leaving for a holiday in Spain and Sarah for a trip to London. Yet, they know their relationship is special and make plans to see each other when they each return. But Sarah doesn’t hear from Eddie. She’s been ghosted.

Sarah’s desperate attempts to reach Eddie though social media are difficult to read, though I’m not sure I would be much different! Though her friends advise her to forget about him and move on, she can’t bear to let go. Her work suffers and her relationships are strained.

But there might be more to Eddie’s silence than a simple loss of interest. It turns out that both he and Sarah harbor secrets from their pasts that echo into the present day.

When I started this book, I thought mystery > romance. Instead, mystery < romance. It wasn’t really my style, but the book was a quick read with a satisfying ending. Certainly, the possibilities and horrors that social media brings to dating come through in the book. Secondary characters, one with infertility struggles and one with mental health issues, were more interesting to me than the main characters. One particularly device was deliberately manipulative and too gimmicky to be entirely effective.

Still, this is a good choice for an “airplane book” since it is engrossing and well-written.