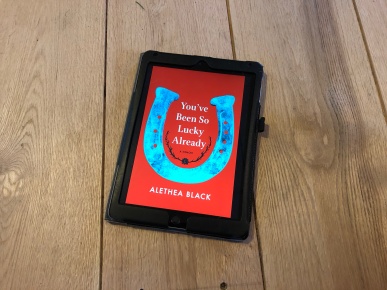 You’ve Been So Lucky Already
by Alethea Black

You’ve Been So Lucky Already, a memoir by Alethea Black, focuses on three areas of her life: her teenage years when her parents were getting divorced, her early twenties when she suffered a mental breakdown, and finally her thirties, when she was overcome with an illness no doctors seemed to be able to diagnose.

Black’s writing is poignant and at the same time very funny. At times, I found myself in tears. It was easy to relate to her teenage self who chose her boyfriend over her father, something she regretted as an adult. Having suffered from chronic depression, I truly felt her pain when she described her symptoms ranging from apathy to fatigue to despair. Being sick for over a year without any clear diagnosis, spending tens of thousands of dollars on alternative treatments, and ultimately losing everything except her dog, Black had every reason to fall into pieces but instead chose to start over with hope and optimism.

Perhaps it’s no surprise that some of my favorite moments had to do with her relationship with her miniature dachshunds. I love anyone who carries their dog in a doggy bjorn or purse; once, she took her dog to her to mass and put a drop of holy water on her snout.

Many individual moments in the book, then, are superb, written well and with observations and insight that resonated with me. One line I loved when talking about a song popular when she was a teenager: “Hearing it’s like being spritzed with a perfume called High School.” The book is also peppered with illustrations that I enjoyed. I couldn’t find the artist’s name in the book; maybe it was Black herself. This one really hit me; it captured how I sometimes feel:

As a whole, though, the book has problems with flow and pacing. The three main sections aren’t adequately integrated. And the final third or so of the book, about her illness, jumps from topic to topic and from past to presents in such a way as to be distracting.

That said, many readers will empathize and see themselves in Black and her struggles. Her style reminded me a bit of Jenny Larsen, and I think her fans would enjoy this book as well.

Be sure to visit the author’s photo gallery on her website!