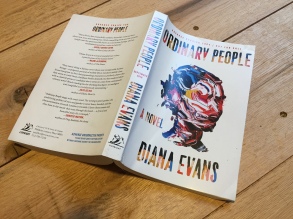 Both couples show signs of strain. After giving birth to Blake, Melissa decided not to return to work, but she resents losing her “outside” self at the same time she begins to be disinterested in sex. For his part, Michael senses the distance between them, wishes to repair the damage but doesn’t know how, and wants the “old” Melissa back. Frustrated, Melissa turns inward while Michael searches the city for solace.

Stephanie, who always wanted a family, is happy to be the domestic czar in her relationship with Damian, but Damian misses the heartbeat of London and has failed to deal with his father’s recent death, becoming a ghost in the relationship. They’ve all reached watersheds and each handle the uncertain waters with different effect.

In lovely prose, Diana Evans shows how fractures in relationships extend to gorges through everyday slights. The characters question whether they can remain fundamentally themselves in relationships with their significant others and as parents and Melissa in particular observes the constraints of traditional gender roles. Melissa, Michael, and Damian are all people of color, and the racism they face is a subtle but important theme.

Music threads through the novel, with the title itself taken by a song performed by John Legend. A key scene happens at a Jill Scott concert; another occurs when a group of friends dances to Michael Jackson’s Thriller. The author even has a playlist to accompany the book on her website. The narrative is firmly rooted in the gritty details of London, drawing on existing restaurants, shops, and neighborhoods. A story about a peripheral character encountering gang violence is especially heart-wrenching.

Sometimes the symbolism is heavy handed. Melissa and Michael live on Paradise Row, and Evans often returns to the Crystal Palace, a beautiful and hopeful structure that fell into disrepair and was destroyed by a fire in the mid-1800s. A supernatural strain that is either really evidence of otherworldly influence or simply an indication of Melissa’s deteriorating emotional state is confusing and therefore ineffective, and is so unnecessary and strange given the realistic grounding of the book otherwise. Even so, it was a very pleasurable read, and I plan to put Diana Evans’ other books on my to-read list.

I won this ARC in a Goodreads giveaway. Thank you Liveright Publishing Corporation and Goodreads!

The UK edition of the book was published earlier this year. I like the cover design released there so much better!