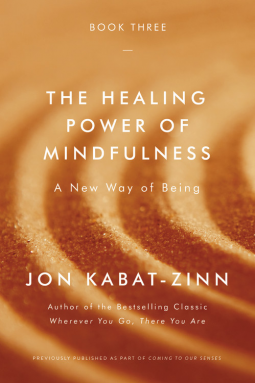 The Healing Power of Mindfulness was originally published as parts V and VI of Jon Kabot-Zinn’s 2005 classic book Coming to Our Senses. This volume is updated and with a new foreword by the author. In it, Kabot-Zinn relates the powerful connection between mindfulness and healing which he describes as coming to terms with things as they are, not clouded by emotions or narratives that might inhibit our awareness of the present moment. This healing through mindfulness practice promotes a number of positive physical and emotional outcomes.

Although the book was very interesting and inspiring, it wasn’t what I expected. I thought there might be practical instructions on using mindfulness to heal emotionally and physically, but this is not a how-to book. The basics of mindfulness meditation are covered in other volumes in the set as well as in print, online, and virtual resources listed at the close of the book. Instead, The Healing Power of Mindfulness discusses the ways mindfulness meditation promotes positive outcomes. It provides the answer to why one should commit to a practice of mindfulness.

My favorite chapters are those that are concrete and/or based firmly in Kabot-Zinn’s personal experience. Relating to physical healing, I enjoyed reading about Christopher Reeve’s remarkable resilience after the horse-riding accident that paralyzed him. Though his doctors believed he would show no improvement, he persisted until he felt the wiggle of a single finger. Even when he didn’t experience the outcomes he’d hoped for, he always felt that doctors could learn from the process and help others with spinal injuries. Poignantly, the author relates his experience with his father’s Alzheimer’s and how that inspired him even more to be present in the moment. One study showed that patients with psoriasis who engaged in guided meditations during phototherapy, needed much less time to remove skin eruptions than did patients in the control condition.

The book also deals with emotional or spiritual healing. One chapter, for example discusses neuroplasticity and how mindfulness can actually change the processes in our brains to promote habits of being (or non-being) associated with positive emotions. A mindfulness practice can reduce stress. It can even help prepare us for death, our ultimate and inevitable fate.

Mindfulness also applie beyond the realm of the individual. Kabot-Zinn discusses how organizations (which he calls orthogonal institutions) can promote a spirit of mindfulness. Using dialogue instead of discussion embraces the ideal of mindfulness and can heal relationships and conflicts between people, groups, and even countries. After attending a Mindfulness-Based Stress Reduction workshop, a judge who instructed jurors before a trial to listen with mindfulness. If only that would happen more!

Though the text was taken from a book published in 2005, it doesn’t feel dated at all. Kabot-Zinn has updated references. When discussing the Super Bowl and the Patriots, he reflected on the team’s more recent successes. The same chapter lauds Colin Kaepernick’s efforts to bring awareness and justice to black victims of police violence.

The book is very dense in some places, and I felt like I had to read some sections multiple times (and maybe need to read again). At times, Kabot-Zinn used very complex (and long) sentences that added to the feeling. Although the book stands on its own, I think it would be more comprehensible after reading the other books in the series. For example, the body scan was mentioned several times, and though I am familiar with it from other sources, the practice itself was described in an earlier volume. If you didn’t know the premise, those sections would be inexplicable.

I am not consistent meditating or practicing mindfulness, but this book certainly has inspired me to recommit to a mindfulness practice!

Thank you to Netgalley and Hatchett Books for an advance reading copy of this book in exchange for an honest review.