George is very happy about the arrival of his grapes – 150 pounds of them.

“Experience has taught me this, that we undo ourselves by impatience. Misfortunes have their life and their limits, their sickness and their health.”
~Michel de Montaigne 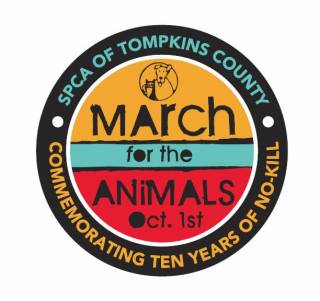 The 2011 March for the Animals is next Saturday at Tompkins County Community College. The March is one of the biggest and most important fundraisers for the SPCA of Tompkins County. Please help George, Walter, Norman, and me raise money to support the lifesaving work of the SPCA. Sponsor us here!

These funds help the SPCA provide medical care to the animals at the shelter. They are hoping the event will raise $100,000, but right now, only 23% of that amount has been raised. It may sound like a lot, but every little bit helps. Please sponsor us!

From the Center for Biological Diversity:

In 2008, the Bush administration removed Endangered Species Act protections for the West Virginia northern flying squirrel. This removal came despite dire projections from global warming models that predicted complete disappearance of the squirrels’ habitat and a lack of evidence to show the species’ populations had rebounded.

In response to a suit from the Center and allies to restore protections for the squirrel, a federal judge in 2011 reinstated its endangered status, holding, in a precedent-setting ruling, that the Service had violated the Endangered Species Act by not following its own science-based recovery plan for the species.

Rather than accepting that pro-science ruling, the Obama administration has decided to appeal it. Apparently, the U.S. Fish and Wildlife Service does not want to have to follow its own recovery plans when deciding whether protections should be retained.

Please contact the Interior Department to help put the squirrels back on the endangered species list – it is the right thing to do. Remember, extinct is forever. We can’t bow to short-term thinking when considering the health of the planet and its inhabitants, especially those who can’t speak for themselves.