Satellite images show the current shape of the oil spill – or disaster, catastrophe, murderous assault on sea life – whatever you prefer to call it. Perhaps looking at the size and shape of this spill, we can understand the comments of Tony Hayward, BP’s CEO, that the spill is a trifle compared to all that blue water in the Gulf of Mexico:

But, as suggested by this website, we should put the spill in perspective. Here’s the size compared to my current city, Ithaca: 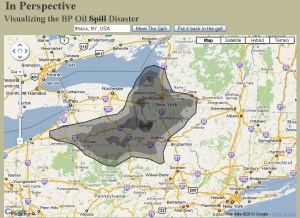 For my family, here’s the spill compared to Ardmore, OK:

But maybe Tony Hayward would be more moved if we showed him this photo of the oil spill superimposed on a map of London:

I’ve been reading a lot since school ended, and the latest novel I finished was Wally Lamb’s The Hour I First Believed. Since it was originally published, I wavered in whether or not I wanted to read the book. The Columbine shootings play a critical role, and for some reason, that was off-putting to me. Trapped in the Tampa airport and needing a book to read for the two legs of the trip back home, I decided it was the best choice at the small airport bookstore.

Reading the book, I was surprised by how much I liked it. The novel was much less about Columbine than I imagined, though the tragedy there played a key role. In the airports and in the planes, I blinked back tears, I was so moved by the description of the event’s aftermath. I thought Lamb did an excellent job layering his fictional characters on the actual event. His chronicle of Maureen’s unhinging after the massacre was moving, difficult, and interesting.

For me, the book lagged a bit in the second half, “Mantis” when the New Orleans refugees, Moze and Janis, arrived in Three Rivers, Connecticut. Janis becomes interested in Caelum’s family archive and Lamb includes “correspondence” and “diary entries” from Caelum’s great-great-great and great-great grandmothers. While these sections of the novel were interesting, I found them distracting from the overall narrative and wish they had been condensed if not eliminated entirely.

That said, I do think this is an enjoyable and worthwhile read.

George had to work on Saturday, and he didn’t want to go home and then to the airport after work. Instead, he stopped at the Antique Mall on Hwy 96. He said he went to get a “wooden tool” he’d noticed early in the week. Only after we got home did I realize he was referring to a “tool for wood” rather than a “wooden tool” which was quite a shock to my mental image.

In any case, the point of this story is that George was very sweet and purchased some postcards for me there. Of course, George doesn’t want to get a reputation for being sweet, so he said he tried to find the “creepiest” ones they had!

Bookmarks for a swap-bot swap!