After writing my last post, I decided I needed to remind folks how strongly and vehemently I oppose drilling in ANWR. Often, the knee-jerk response to the $4.00/gallon gas is to call for more domestic production and drilling in ANWR or off-shore. Neither of these approaches is the solution to our dependence on oil–our dependence on oil is the problem. As the article “ANWR is Not the Answer” outlines, oil is a declining resource, and there is little we can do to adjust the supply. Instead, we must focus on the demand. Simply, we must use less oil.

When I was working in publishing, I met a guy named Christian at the trade shows I went to for work. At the time, Christian lived in Brooklyn and commuted to Manhattan by bike. He said something that has stuck with me for years… He talked about being annoyed with friends or coworkers who called, late to appointments or work, because they were stuck “in traffic.” Christian scoffed, “They aren’t in traffic. They are traffic!” I thought that was so brilliant–we do think of traffic as being apart from us, something we can’t control, not something that we actually create. Well, we have got to stop being traffic and look for other transportation alternatives.

Furthermore, drilling in ANWR would have little effect on the current energy crisis, something we’ve known for as many as four years. Any oil from ANWR would not be on the market for 10 years, and then, that oil may ultimately decrease the cost of gas by just ONE CENT per gallon. Destroying ANWR for a measly cent per gallon? It’s just not worth it.

Defenders of Wildlife explains how drilling in ANWR would affect the wildlife who depend on the area:

Today, CNN/Money published an online article, “Oklahoma’s Painful Car Culture.” In a survey of fifty cities best able to deal with the high gasoline prices, Tulsa and Oklahoma ranked 49th and 50th respectively. (San Francisco, New York, and Chicago were the top three, due to the public transportation infrastructures these cities enjoy.)

In Oklahoma, people often drive long distances to work (Lynnie spent several months commuting from Ardmore to Oklahoma City–100 miles, and I drove from Oklahoma City to Norman when I worked at the University of Oklahoma Press). Few alternatives to driving exist. In Oklahoma, folks LOVE their vehicles, and, usually, it’s the bigger the better. Oklahoma City, due to its large area, makes creating a public transit system difficult. And, in Oklahoma, we don’t really bike or walk, even for a couple of blocks–and watch out if you do. (One time, Anna visited me when I was living in Norman. I had to work one day she was there, and she went out walking. I remember her reporting that she saw no other pedestrians and that people looked at her askance.)

Perhaps the car culture in Oklahoma is changing. One commuter from McLoud started organizing carpools to and from Oklahoma City. Tulsa and OKC are investigating ways they can increase public transportation options. These alternatives are promising.

Yesterday, I schlepped nine copies of my dissertation to the bookstore, in the very final step of this process. (My family is very excited about my Ph.D., so they all want bound copies, plus we have to provide two copies to the school for the library.) It was a total relief to hand them over and to know that now I am totally, finally finished.

I did, however, have serious sticker shock. I knew that I had to pay a $55 charge to deposit the document, as well as a $20 per copy binding fee. I did not anticipate all the other little charges that made me drop my jaw. Each of the seven copies for myself and my family cost $5 for a mailing charge. I also had to pay for mailing envelopes. The worst charge was for the length of my title. I went one character over the limit for the second tier ($5/book), so I had to pay an additional $13 per copy for a freaking “s.” All total, I paid the bookstore $388. (I should say Grandma paid the bookstore, since she helped fund this operation.)

I will officially graduate in August 2008, and the bound copies should arrive in approximately 4 months. 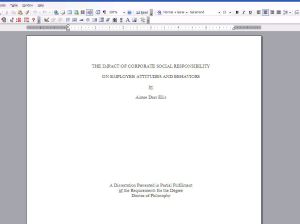 “Love until it hurts, then there is no hurt, but only more love….”–Mother Teresa

Look at these cute little pigs! Aren’t they adorable? I love the expressions they are wearing. The sculptures were hand-sculpted from polymer clay, fired, and glazed by Betty at lvsbeadsnthings. (You can see more of her clay critters on her blog.) Betty was kind enough to trade these (and some of her patented puppy poppers) for a pair of earrings and some gemstone pendants.

Pigs are amazing animals: smart, funny, and expressive. I love to have little piggy things around the house to remind me of the pigs at the Farm Sanctuary. The Farm Sanctuary is my favorite place on earth, and the pigs are my favorite animals there. Having my own little pigs makes me happy…thanks Betty for contributing to my joy!